Event is a subclass of packageable element which specifies some occurrence or happening. For example, 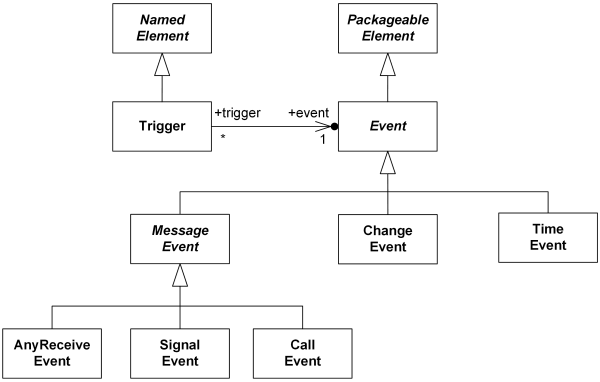 Upon their occurrences, events are placed into the input pool of events of the instance of behaviored classifier where they occurred. Event is dispatched when it is taken from the input pool and is processed by the classifier. At this point, the event is considered consumed and is referred to as the current event. A consumed event is no longer available for processing. An event identified as deferred by a state that does not fire any trigger is not dispatched and is therefore never consumed.

Event may potentially trigger some effects. For example, a signal event may cause a state machine to trigger a transition.

Event has no specific notation, while some of its subclasses have.

Creation Event which occurred during creation of an object was removed in UML 2.4.