You can find some state machine diagrams examples here:

Behavioral state machine is specialization of behavior and is used to specify discrete behavior of a part of designed system through finite state transitions. The state machine formalism used in this case is an object-based variant of Harel statecharts.

Behavior is modeled as a traversal of a graph of state nodes connected with transitions. Transitions are triggered by the dispatching of series of events. During the traversal, the state machine could also execute some activities.

The association between a state machine and its context classifier or behavioral feature does not have a special notation.

State machine could be rendered in the frame labeled as state machine or stm in abbreviated form. (Note, that for whatever reason all examples of state machine frames in Chapter 15 of UML 2.4 spec do not have this frame type specified.) The content area of the frame is usually state machine itself but in general it could contain other kinds of UML diagrams. 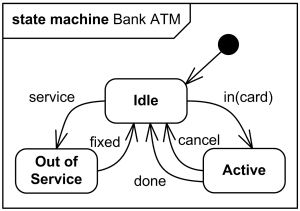 Vertex is named element which is an abstraction of a node in a state machine graph. In general, it can be the source or destination of any number of transitions.

Subclasses of vertex are:

State is a vertex which models a situation during which some (usually implicit) invariant condition holds.

State in behavioral state machines models a situation during which some (usually implicit) invariant condition holds. The invariant may represent a static situation such as an object waiting for some external event to occur. However, it can also model dynamic conditions such as the process of performing some behavior (i.e., the model element under consideration enters the state when the behavior commences and leaves it as soon as the behavior is completed).

Inherited states are drawn with dashed lines or gray-toned lines.

The UML defines the following kinds of states:

A simple state is a state that does not have substates - it has no regions and it has no submachine states.

Simple state is shown as a rectangle with rounded corners and the state name inside the rectangle.

Optionally, state may have state name placed inside an attached name tab. The name tab is a rectangle, usually resting on the outside of the top side of a state.

Name compartment holds the (optional) name of the state, as a string. States without names are called anonymous states and are all considered distinct (different) states. Name compartments should not be used if a name tab is used and vice versa. It is recommended not to use the state wih the same name several times in the same diagram.

Internal activities compartment holds a list of internal actions or state (do) activities (behaviors) that are performed while the element is in the state. The activity label identifies the circumstances under which the behavior specified by the activity expression will be invoked. The behavior expression may use any attributes and association ends that are in the scope of the owning entity. For list items where the expression is empty, the slash separator is optional.

Several labels are reserved for special purposes and cannot be used as event names. The following are the reserved activity labels:

Internal transition compartment contains a list of internal transitions, where each item has the form as described for trigger. Each event name may appear more than once per state if the guard conditions are different. The event parameters and the guard conditions are optional. If the event has parameters, they can be used in the expression through the current event variable.

Generally, composite state is defined as state that has substates (nested states). Substates could be sequential (disjoint) or concurrent (orthogonal). UML 2.4 defines composite state as the state which contains one or more regions. (Note, that region is defined back as an orthogonal part of either a composite state or a state machine.) A state is not allowed to have both regions and a submachine.

Orthogonal composite state has more than one regions. Each region has a set of mutually exclusive disjoint subvertices and a set of transitions. A given state may only be decomposed in one of these two ways.

Composite state may have state name placed inside an attached name tab. The name tab is a rectangle, usually resting on the outside of the top side of a state.

The first three compartments are the same as for simple state.

Decomposition compartment shows composition structure of the state as a a nested diagram with regions, states, and transitions. For convenience and appearance, the text compartments may be shrunk horizontally within the graphic region.

In some cases, it is convenient to hide the decomposition of a composite state. For example, there may be a large number of states nested inside a composite state and they may simply not fit in the graphical space available for the diagram. In that case, the composite state may be represented by a simple state graphic with a special "composite" icon, usually in the lower right-hand corner. This icon, consisting of two horizontally placed and connected states, is an optional visual cue that the state has a decomposition that is not shown in this particular diagram. Instead, the contents of the composite state are shown in a separate diagram. The "hiding" is a matter of graphical convenience and has no semantic significance in terms of access restrictions.

A composite state may have one or more entry and exit points on its outside border or in close proximity of that border (inside or outside).

A region is defined in UML 2.4 as an orthogonal part of either a composite state or a state machine. Region contains states and transitions.

A composite state or state machine with regions is shown by tiling the graph region of the state/state machine using dashed lines to divide it into regions. Each region may have an optional name and contains the nested disjoint states and the transitions between these. The text compartments of the entire state are separated from the orthogonal regions by a solid line.

A composite state or state machine with just one region is shown by showing a nested state diagram within the graph region.

In order to indicate that an inherited region is extended, the keyword «extended» is associated with the name of the region.

A pseudostate is an abstract vertex that encompasses different types of transient vertices in the state machine graph.

An initial pseudostate represents a default vertex that is the source for a single transition to the default state of a composite state. There can be at most one initial vertex in a region. The outgoing transition from the initial vertex may have a behavior, but not a trigger or guard.

An initial pseudostate is shown as a small solid filled circle.

In a region of a classifier behavior state machine, the transition from an initial pseudostate may be labeled with the trigger event that creates the object; otherwise, it must be unlabeled. If it is unlabeled, it represents any transition from the enclosing state.

A terminate pseudostate is shown as a cross.

An entry point is shown as a small circle on the border of the state machine diagram or composite state, with the name associated with it. 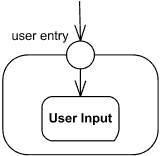 An exit point is shown as a small circle with a cross on the border of the state machine diagram or composite state, with the name associated with it. 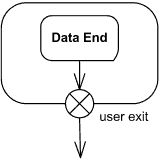 Alternatively, the “bracket” notation can also be used for the transition oriented notation.

Choice pseudostate realizes a dynamic conditional branch. It evaluates the guards of the triggers of its outgoing transitions to select only one outgoing transition. The decision on which path to take may be a function of the results of prior actions performed in the same run-to-completion step. Dynamic choices should be distinguished from static junction branch points.

A choice pseudostate is shown as a diamond-shaped symbol.

Select outgoing transition based on condition.

If all guards associated with triggers of transitions leaving a choice pseudostate are binary expressions that share a common left operand, simplified notation could be used. The left operand is placed inside the diamond-shaped symbol and the rest of the guard expressions is placed on the outgoing transitions. 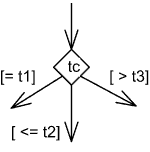 Choice based on guards applied to the value inside diamond

Fork pseudostate vertices serve to split an incoming transition into two or more transitions terminating on orthogonal target vertices (i.e., vertices in different regions of a composite state). The segments outgoing from a fork vertex must not have guards or triggers.

The notation for a fork is a short heavy bar. The bar may have one or more arrows from the bar to states. A transition string may be shown near the bar.

The notation for a join is a short heavy bar. The bar may have one or more arrows from source states to the bar. A transition string may be shown near the bar.

A junction is represented by a small black circle.

The special case of the transition from the junction having a history as target may optionally be presented as the target being the state list state symbol.

A shallow history is indicated by a small circle containing an "H". It applies to the state region that directly encloses it.

A deep history is indicated by a small circle containing an "H*". It applies to the state region that directly encloses it.

A final state is shown as a circle surrounding a small solid filled circle.

A transition is a directed relationship between a source vertex and a target vertex. It may be part of a compound transition, which takes the state machine from one state configuration to another, representing the complete response of the state machine to an occurrence of an event of a particular type.

The default notation for a behavioral transition is described by the following BNF (slightly modifed and fixed version of the BNF from UML 2.4 specs):

Optional list of triggers specifies events that may induce state transition. An event satisfies a trigger if it matches the event associated with the trigger. Since more than one transition may be enabled by the same event, it is a necessary but not sufficient condition for the firing of a transition.

The guard-constraint is a Boolean expression written in terms of parameters of the triggering event and attributes and links of the context object. The guard constraint may also involve tests of orthogonal states of the current state machine, or explicitly designated states of some reachable object (for example, "in Active State").

The behavior-expression is executed if and when the transition fires. It may be written in terms of operations, attributes, and links of the context object and the parameters of the triggering event, or any other features visible in its scope. The behavior expression may be an action sequence.

An example of transition with guard constraint and transition string:

When left-mouse-down event happens (trigger) and click coordinates are in active_window (guard), link will be selected and followed (behavior-expression), and transition fired.

The triggers and the subsequent effect of a transition may be notated either textually according to the syntax above or using graphical symbols on a transition.

Transitions originating from composite states are called high-level transitions or group transitions. If triggered, they result in exiting of all the substates of the composite state executing their exit activities starting with the innermost states in the active state configuration.

A compound transition represents a "semantically complete" path made of one or more transitions, originating from a set of states (as opposed to pseudo-state) and targeting a set of states.

An internal transition executes without exiting or re-entering the state in which it is defined. This is true even if the state machine is in a nested state within this state.