This is an example of UML protocol state machine diagram showing Thread states and Thread life cycle for the Thread class in Java™. A thread is a lightweight process, the smallest unit of scheduled execution. Thread state is Java Virtual Machine (JVM) state reported by JVM to a Java program, it does not reflect any operating system (OS) thread state. At any given point in time an instance of the Thread class in Java 5 to Java 9 could be in one of the following Thread states: 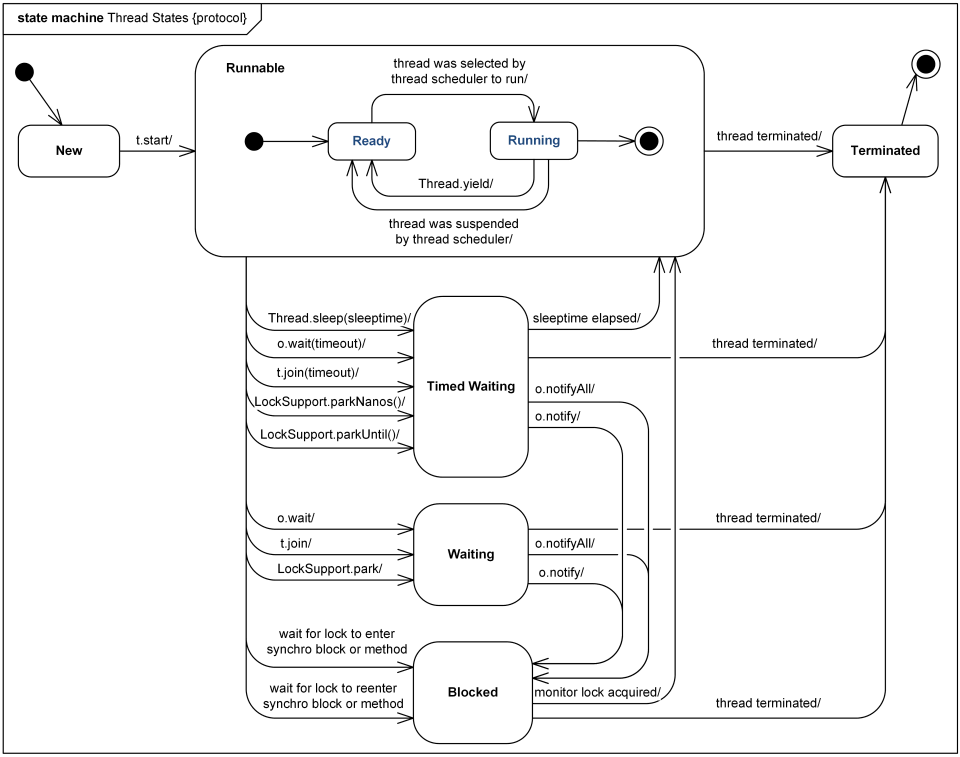 New is the thread state for a thread which was created but has not yet started.

A thread in the Runnable state is executing from the JVM's point of view but in fact it may be waiting for some resources from the OS such as processor. This state could be considered as a composite state with two substates. When a thread transitions to the Runnable state, the thread first goes into the Ready substate. Thread scheduling decides when the thread could actually start Running. Thread.yield() is explicit recommendation to thread scheduler to pause the currently executing thread to allow some other thread to execute. Thread is alive if it has been started and has not yet died.

A thread moves to the Waiting state after calling one of the following methods without timeout:

Note, that a thread in the waiting state is waiting indefinitely for another thread to provide something which is needed by the waiting thread. Once it is done, that other thread could call Object.notify() or Object.notifyAll() on the object the threads share. A thread that has called Thread.join() is waiting for a specified thread to terminate. It means that waiting state could be made a composite state with states corresponding to these specific conditions.

After thread has completed execution of run() method, it is moved into Terminated state.