Collaboration extends both behaviored classifier and structured classifier to explain how a collection of cooperating instances achieve a joint task or set of tasks. Its primary purpose is to explain how a system works and, therefore, it typically only incorporates those aspects of reality that are deemed relevant to the explanation.

A collaboration describes a structure of collaborating elements (roles), each performing a specialized function, which collectively accomplish some desired functionality (task). Details, such as the identity or precise class of the actual participating instances are suppressed. 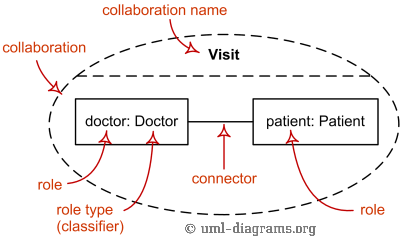 A collaboration specifies a view (or projection) of a set of cooperating classifiers. It describes the required links between instances that play the roles of the collaboration, as well as the features required of the classifiers that specify the participating instances.

Several collaborations may describe different projections of the same set of classifiers.

Instances of different classifiers can play a role defined by a given interface, as long as these classifiers realize the interface. Several interfaces may be realized by the same classifier, even in the same context, but their features may be different subsets of the features of the realizing classifier.