Model is a specialized UML package which describes a system from a certain point of view, viewpoint. The viewpoint may also refer to a profile definition. Models are used to draw model diagrams.

[UML 2.5 FTF - Beta 1] is not very consistent defining the scope of the model, a system. In one place it says that a model captures a view of a physical system, while in another one - that system is meant in the broadest sense and may include not only software and hardware but organizations and processes.

It means that different models can be provided for the same system, each model representing the system from a different viewpoint or at a different abstraction level.

UML 2.5 loosely defines stakeholders "by example", as e.g., designers, users, or customers of the system.

Stakeholder (in the context of software projects or systems) could be defined as a person, group or organization within or outside of the project or the system, sponsoring or having an interest in the project, or having a positive or negative influence in the project.

UML 2.5 specification is also inconsistent between its intentions and examples explaining models. While it states that a model is complete in the sense that it covers the whole system, an example provided shows models representing parts (tiers) of a system.

Model is notated using the ordinary package symbol (a folder icon) with a small triangle in the upper right corner of the large rectangle.

If contents of the model are shown within the large rectangle, the triangle may be drawn to the right of the model name in the tab.

Model could be notated as a package with the keyword «model» placed above the name of the model. 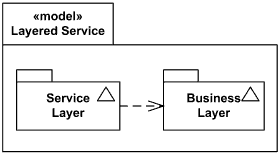 You can see an example of a model diagram of a layered application based on Microsoft Application Achitecture Guide, 2nd Ed. here - Multi-Layered Application Model.