A package merge is a directed relationship between two packages that indicates that content of one package is extended by the contents of another package.

This mechanism should be used when elements defined in different packages have the same name and are intended to represent the same concept. Most often it is used to provide different definitions of a given concept for different purposes, starting from a common base definition.

A given base concept is extended in increments, with each increment defined in a separate merged package. By selecting which increments to merge, it is possible to obtain a custom definition of a concept for a specific end.

Package merge is particularly useful in meta-modeling and is extensively used in the definition of the UML metamodel.

Package merge is shown using a dashed line with an open arrowhead pointing from the receiving package to the merged package. Keyword «merge» is shown near the dashed line. 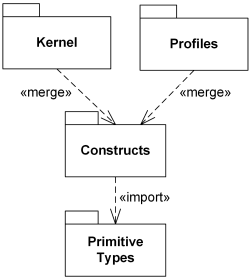