Interaction operator could be one of:

An interaction constraint is shown in square brackets covering the lifeline where the first event occurrence will occur, positioned above that event, in the containing interaction or interaction operand.

UML 2.4 often refers to interaction constraint as a guard.

The interaction operator alt means that the combined fragment represents a choice or alternatives of behavior. At most one of the operands will be chosen. The chosen operand must have an explicit or implicit guard expression that evaluates to true at this point in the interaction.

An implicit true guard is implied if the operand has no guard. 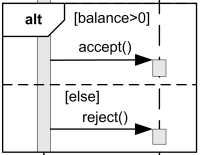 The interaction operator opt means that the combined fragment represents a choice of behavior where either the (sole) operand happens or nothing happens. An option is semantically equivalent to an alternative combined fragment where there is one operand with non-empty content and the second operand is empty.

UML 2.4 specification provides weird description of the loop operator with odd examples. I will try to extract here some sense from that.

Loop could be controlled by either or both iteration bounds and a guard.

Loop operand could have iteration bounds which may include a lower and an upper number of iterations of the loop. Textual syntax of the loop is:

If loop has no bounds specified, it means potentially infinite loop with zero as lower bound and infinite upper bound. 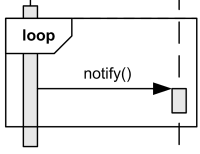 If only min-int is specified, it means that upper bound is equal to the lower bound, and loop will be executed exactly the specified number of times. 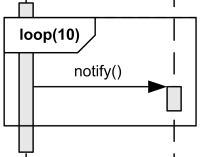 Besides iteration bounds loop could also have an interaction constraint - a Boolean expression in square brackets. To add to the other confusions, UML 2.4 also calls both of them guards.

UML tries to shuffle the simplest form of for loop and while loop which causes weird UML 2.3 loop semantics on p.488 [UML 2.3 - Superstructure]: "after the minimum number of iterations have executed and the Boolean expression is false the loop will terminate". This is clarified - though with opposite meaning - on the next page as "the loop will only continue if that specification evaluates to true during execution regardless of the minimum number of iterations specified in the loop." 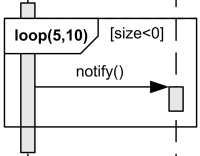 We may guess that as per UML 2.3, the loop is expected to execute
minimum 5 times and no more than 10 times.
If guard condition [size<0] becomes false loop terminates
regardless of the minimum number of iterations specified.
(Then why do we need that min number specified?!)

The interaction operator break represents a breaking or exceptional scenario that is performed instead of the remainder of the enclosing interaction fragment. 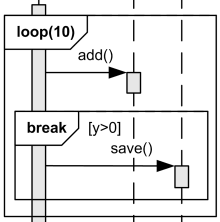 A combined fragment with the operator break should cover all lifelines of the enclosing interaction fragment.

Note, UML allows only one level - directly enclosing interaction fragment - to be abandoned. This could become really annoying if double loop or loop with other combined fragments should be broken.

UML 2.3 states that when break operand has no guard, the choice between the break operand and the rest of the enclosing interaction fragment is done "non-deterministically" which most likely means "unpredictable". Don't use break without guard.

The interaction operator par defines potentially parallel execution of behaviors of the operands of the combined fragment. Different operands can be interleaved in any way as long as the ordering imposed by each operand is preserved.

Set of traces of the parallel operator describes all the possible ways or combinations that occurrence specifications of the operands may be interleaved without changing the order within each operand. 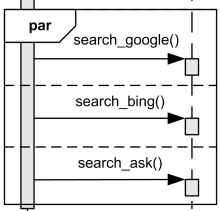 Search Google, Bing and Ask in any order, possibly parallel. 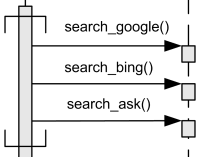 The interaction operator strict requires a strict sequencing (order) of the operands on the first level within the combined fragment. 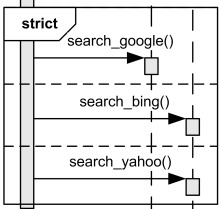 Search Google, Bing and Yahoo in the strict sequential order.

The interaction operator seq means that the combined fragment represents a weak sequencing between the behaviors of the operands.

Weak sequencing is defined by the set of traces with these properties: 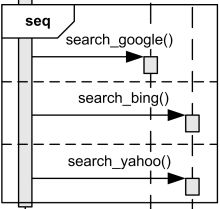 Search Google possibly parallel with Bing and Yahoo, but search Bing before Yahoo. 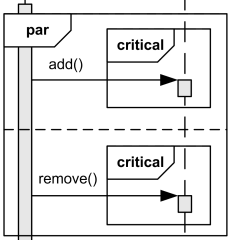 Add() or remove() could be called in parallel,
but each one should run as a critical region.

Semantics and the purpose of the interaction operator ignore is obscure. UML 2.3 defines its meaning as "there are some message types that are not shown within this combined fragment. These message types can be considered insignificant and are implicitly ignored if they appear in a corresponding execution. Alternatively, one can understand ignore to mean that the message types that are ignored can appear anywhere in the traces."

On the other hand, explanations to the Figure 14.25 on p. 530 [UML 2.3 - Superstructure] are that this kind of interaction could be used to specify a test of an existing system. At the runtime the messages ignored in tests "will of course be handled in some manner by the running system".

The list of ignored messages follows the operand enclosed in a pair of curly braces "{" and "}". Ignore operation is typically combined with other operations such as "assert ignore {m, s}."

Ignore get() and set() messages, if any.

The interaction operator consider defines which messages should be considered within this combined fragment, meaning that any other message will be ignored.

The list of considered messages follows the operand enclosed in a pair of curly braces "{" and "}". Consider operation is typically combined with other operations such as "assert consider {m, s}."

Consider only add() or remove() messages,
ignore any other.

The interaction operator assert means that the combined fragment represents the assertion that the sequences of the assert operand are the only valid continuations (must be satisfied by a correct design of the system). All other continuations result in an invalid trace. 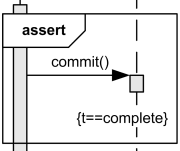 Commit() message should occur at this point,
following with evaluation of state invariant.

The interaction operator neg describes combined fragment of traces that are defined to be negative (invalid). Negative traces are the traces which occur when the system has failed. All interaction fragments that are different from the negative are considered positive, meaning that they describe traces that are valid and should be possible.

Should we receive back timeout message,
it means the system has failed.