Syntax for the message is:

Arguments of a message could only be:

A message is shown as a line from the sender message end to the receiver message end. The line must be such that every line fragment is either horizontal or downwards when traversed from send event to receive event. The send and receive events may both be on the same lifeline. The form of the line or arrowhead reflects properties of the message.

A message reflects either an operation call and start of execution or a sending and reception of a signal.

Depending on the type of action that was used to generate the message, message could be one of:

Service starts Task and proceeds in parallel without waiting.

Create message is sent to a lifeline to create itself. It is shown as a dashed line with open arrowhead (looks the same as reply message), and pointing to the created lifeline's head.

Note, that this weird convention to send a message to a nonexisting object to create itself is used both in UML 1.x and 2.x. In OOAD practice create message should probably be sent to the class, see Message in OOAD discussion for the backgound information. In Smalltalk-80 new objects are created by sending messages to classes, with an instance of the class created and returned back. So one way to interpret UML create message notation is probably as a shortcut for these actions.

Delete message (called stop in previous versions of UML) is sent to terminate another lifeline. The lifeline usually ends with a cross in the form of an X at the bottom denoting destruction occurrence.

UML 2.4 specification provides neither specific notation for delete message nor a stereotype. Until they provide some notation, we can use custom «destroy» stereotype. 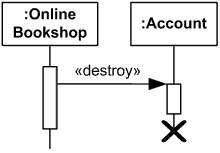 Reply message to an operation call is shown as a dashed line with open arrow head (looks similar to creation message).

Web Client searches Online Bookshop and waits for results to be returned.

Messages by Presence of Events

Depending on whether message send event and receive events are present, message could be one of:

The semantics of a complete message is the trace <sendEvent, receiveEvent>. Both sendEvent and receiveEvent are present.

Unknown message - both sendEvent and receiveEvent are absent (should not appear).

Lost Message is a message where the sending event is known, but there is no receiving event. It is interpreted as if the message never reached its destination. The semantics is the trace <sendEvent>, receiveEvent is absent. Lost messages are denoted with as a small black circle at the arrow end of the message.

Found Message is a message where the receiving event is known, but there is no (known) sending event. It is interpreted as if the origin of the message is outside the scope of the description. This may for example be noise or other activity that we do not want to describe in detail. The semantics is simply the trace: <receiveEvent>, while send event is absent.

Found Messages are denoted with a small black circle at the starting end of the message.