UML Association
Between Actor and Use Case

Each use case represents a unit of useful functionality that subjects provide to actors. An association between an actor and a use case indicates that the actor and the use case somehow interact or communicate with each other.

Only binary associations are allowed between actors and use cases.

An actor could be associated to one or several use cases.

Customer actor is associated with two use cases -
Browse Items and Place Order.

A use case may have one or several associated actors.

Manage Account use case is associated with
Customer and Bank actors.

If there are several actors associated to the same use case, it may not be obvious from use case diagram which actor initiates the use case, i.e. is a "primary actor". (In non-standard UML, primary actors are those using system services, and supporting actors are actors providing services to the system.)

UML allows the use of multiplicity at one or both ends of an association between the actor and the use case.

Multiplicity of a Use Case

When an actor has an association to a use case with a multiplicity that is greater than one at the use case end, it means that a given actor can be involved in multiple use cases of that type.

Bank actor is involved in multiple Transfer Funds use cases.

UML 2.x specifications including UML 2.5 allow any reasonable interpretation of this kind of interaction of a given actor with multiple use cases, and intentionally keep it undefined.

For example, use case multiplicity could mean that an actor interacts with multiple use cases:

Multiplicity of an Actor

Required actor may be explicitly denoted using multiplicity 1 or greater. UML 2.5 also allows actor to be optional. Multiplicity 0..1 of actor means that the actor may or may not participate in any of their associated use cases. 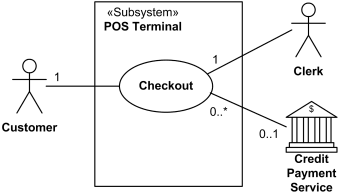 Checkout use case requires Customer actor, hence
the 1 multiplicity of Customer. The use case may not need
Credit Payment Service (for example, if payment is in cash),
thus the 0..1 multiplicity.

When a use case has an association to an actor with a multiplicity that is greater than one at the actor end, it means that more than one actor instance is involved in the use case.

Two or more Player actors are involved
in the Play Game use case.
Each Player participates in one Play Game.

UML 2.x specifications including UML 2.5 allow any reasonable interpretation of this kind of interaction of multiple actors with a use case, and intentionally keep it undefined.

For instance, multiplicity of actor could mean that interaction of a particular use case with several separate actor instances might be: