Association is a relationship between classifiers which is used to show that instances of classifiers could be either linked to each other or combined logically or physically into some aggregation.

There are several concepts related to association:

UML 2.4 specification states that for the association: "Aggregation type, navigability, and end ownership are orthogonal concepts, ..." which is clearly an overstatement. Orthogonal usually means completely independent. While notation for aggregation type, navigability, and association end ownership could be applied independently, the concepts themselves are not orthogonal. For example, in UML 2.4 end property of association owned by an end class is navigable, which clearly makes navigability dependent on ownership. 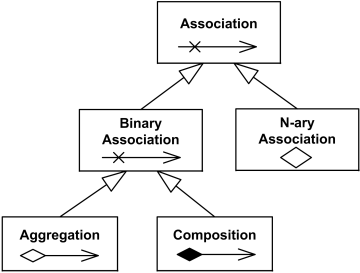 Association Wrote between Professor and Book
with association ends author and textbook.

Professor "playing the role" of author is associated
with textbook end typed as Book.

The idea of the role is that the same classifier can play the same or different roles in other associations. For example, Professor could be an author of some Books or an editor.

The "ownership" dot may be used in combination with the other graphic line-path notations for properties of associations and association ends. These include aggregation type and navigability.

UML standard does not mandate the use of explicit end-ownership notation, but defines a notation which shall apply in models where such use is elected. The dot notation must be applied at the level of complete associations or higher, so that the absence of the dot signifies ownership by the association. In other words, in binary associations the dot will be omitted only for the ends which are not owned by a classifier.

Association end qb is an attribute of SearchService class
and is owned by the class.

UML specification does not dictate how efficient this access should be or any specific mechanism to achieve the efficiency. It is implementation specific.

When end property of association is marked as not navigable, in [UML 2.4] it means that "access from the other ends may or may not be possible, and if it is, it might not be efficient." The problem with this definition of not navigable is that it actually means "whatever" or "who cares?" navigability.

This definition is odd because it makes navigability strongly dependent on ownership, while these are assumed to be orthogonal concepts; some examples in UML 2.4 specs show end properties owned by a class as not navigable, which contradicts to the definition above; and navigability is defined using "navigable owned end of the association".

Both ends of association have unspecified navigability.

A2 has unspecified navigability while B2 is navigable from A2.

A3 is not navigable from B3 while B3 has unspecified navigability.

A visibility symbol can be added as an adornment on a navigable end to show the end’s visibility as an attribute of the featuring classifier.

Each association has specific arity as it could relate two or more items.

Job and Year classifiers are associated

Order of the ends and reading: Car - was designed in - Year

Any association may be drawn as a diamond (larger than a terminator on a line) with a solid line for each association end connecting the diamond to the classifier that is the end’s type. N-ary association with more than two ends can only be drawn this way.

Aggregation is a binary association representing some whole/part relationship. Aggregation type could be either:

Link is rendered using the same notation as for an association. Solid line connects instances rather than classifiers. Name of the link could be shown underlined though it is not required. End names (roles) and navigation arrows can be shown.

Link Wrote between instance p of Professor playing author role
and instance b of Book in the textbook role.