Control node is an activity node used to coordinate the flows between other nodes. It includes:

Activity controls nodes could be used both in activity diagrams as well as in interaction overview diagrams.

Initial node is a control node at which flow starts when the activity is invoked.

A control token is placed at the initial node when the activity starts, but not in initial nodes in structured nodes contained by the activity. Tokens in an initial node are offered to all outgoing edges. For convenience, initial nodes are an exception to the rule that control nodes cannot hold tokens if they are blocked from moving downstream, for example, by guards.

Activities may have more than one initial node. In this case, invoking the activity starts multiple flows, one at each initial node.

Note that flows can also start at other nodes, so initial nodes are not required for an activity to start execution.

Initial nodes are shown as a small solid circle.

Flow final node is a control final node that terminates a flow. It destroys all tokens that arrive at it but has no effect on other flows in the activity. Flow final was introduced in UML 2.0.

The notation for flow final node is small circle with X inside.

Activity final nodes are shown as a solid circle with a hollow circle inside. It can be thought of as a goal notated as "bull’s eye," or target.

Decision node is a control node that accepts tokens on one or two incoming edges and selects one outgoing edge from one or more outgoing flows. Decision nodes were introduced in UML to support conditionals in activities.

The edges coming into and out of a decision node, other than the decision input flow (if any), must be either all object flows or all control flows.

Each token arriving at a decision node can traverse only one outgoing edge. Tokens are not duplicated. Each token offered by the incoming edge is offered to the outgoing edges.

Which of the edges is actually traversed depends on the evaluation of the guards on the outgoing edges. The order in which guards are evaluated is not defined, i.e. we should not rely on any visual or text description order.

The notation for a decision node is a diamond-shaped symbol. 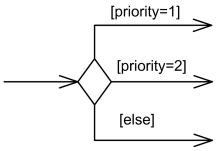 Decision node with three outgoing edges and [else] guard.

Decision input behavior is specified by the keyword «decisionInput» and some decision behavior or condition placed in a note symbol, and attached to the appropriate decision node. 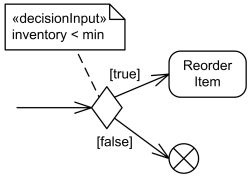 A decision input flow is specified by the keyword «decisionInputFlow» annotating that flow. 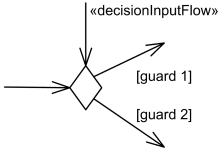 Merge node is a control node that brings together multiple incoming alternate flows to accept single outgoing flow. There is no joining of tokens. Merge should not be used to synchronize concurrent flows.

For example, if a decision is used after a fork, the two flows coming out of the decision need to be merged into one before going to a join; otherwise, the join will wait for both flows, only one of which will arrive.

All edges coming into and out of a merge node must be either object flows or control flows.

The notation for a merge node is a diamond-shaped symbol with two or more edges entering it and a single activity edge leaving it.

Fork node is a control node that has one incoming edge and multiple outgoing edges and is used to split incoming flow into multiple concurrent flows. Fork nodes are introduced to support parallelism in activities. As compared to UML 1.5, UML 2.0 activity forks model unrestricted parallelism.

The notation for a fork node is a line segment with a single activity edge entering it, and two or more edges leaving it.

Fork node with a single activity edge entering it, and three edges leaving it.

If guards are used on edges outgoing from forks, the modelers should ensure that no downstream joins depend on the arrival of tokens passing through the guarded edge. If that cannot be avoided, then a decision node should be introduced to have the guard, and shunt the token to the downstream join if the guard fails.

Join node is a control node that has multiple incoming edges and one outgoing edge and is used to synchronize incoming concurrent flows. Join nodes are introduced to support parallelism in activities.

The notation for a join node is a line segment with several activity edges entering it, and only one edge leaving it.

Join node with three activity edges entering it, and a single edge leaving it.

Join nodes have a join specification which is Boolean value specification using the names of the incoming edges to specify the conditions under which the join will emit a token.

The default join specification is the reserved string "and". It is equivalent to a specification that requires at least one token offered on each incoming edge.

Join specifications are shown in curly braces near the join node as joinSpec=....