Action is a named element which represents a single atomic step within activity, i.e. that is not further decomposed within the activity. Activity represents a behavior that is composed of individual elements that are actions.

Note, that call behavior action may reference (call) activity. This action is simple for the activity containing it, but may be complex in its effect. An activity defines a behavior that can be reused in many places.

Explicitly modeled actions as part of activities are new in UML 2.0, and replace action state, call state, and subactivity state in UML 1.5.

Actions are notated as round-cornered rectangles. Name or description of the action is placed inside of the rectangle.

Name of the action is usually action verb or noun for the action with some explanation. Don't use state names as action names. Some action name examples:

Action could also be expressed in some application-dependent action language.

An action may have sets of incoming and outgoing activity edges that specify control flow and data flow from and to other nodes.

An action will not begin execution until all of its input conditions are satisfied. The completion of the execution of an action may enable the execution of a set of successor nodes and actions that take their inputs from the outputs of the action.

Local pre-conditions and local post-conditions are constraints that should hold when the execution starts and completes, respectively. They hold only at the point in the flow that they are specified, not globally for other invocations of the behavior at other places in the flow or on other diagrams.

How local pre- and postconditions are enforced is determined by the implementation. For example, violations may be detected at compile time or runtime. The effect may be an error that stops the execution or just a warning, and so on.

Local pre-conditions and local post-conditions are shown as notes attached to the invocation with the keywords «localPrecondition» and «localPostcondition», respectively. 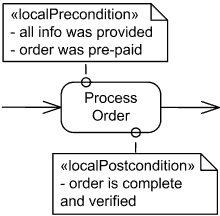 Action subclasses are listed below. Note, that I added object actions and event actions, which are not defined explicitly in UML 2.4 specification. 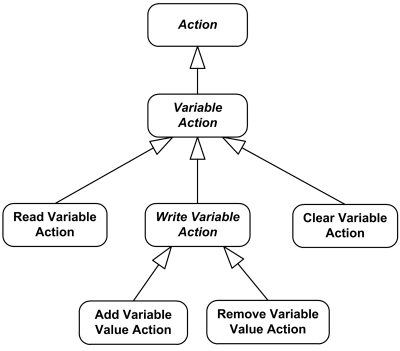 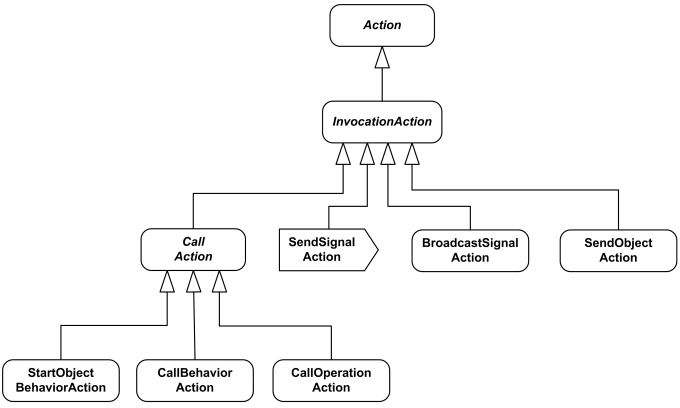 If the call is asynchronous, the call action completes immediately after behavior started. Any return or out values from the invoked behavior are not passed back.

Call behavior action is shown as action with the name of the behavior that is performed by the action or description of the behavior placed inside the action's round-cornered rectangle. If the node name is different than the behavior name, then it appears in the symbol instead.

Note, that because it looks exactly the same way as the common action, there is no way just looking at the diagram to say whether the name is common action name, call behavior action name or some behavior name.

As you know, some subclasses of behavior are interaction, state machine, activity.

Call activity action is indicated by placing a rake-style symbol within the action symbol. The rake resembles a miniature hierarchy, indicating that this invocation starts another activity. Note, that though UML provides this notation, there is no official call activity action in UML specification.

Pre- and post-conditions on the behavior can be shown using keywords «precondition» and «postcondition».

Send signal action is an invocation action that creates a signal from its inputs, and transmits it to the specified target object, where it may cause the firing of a state machine transition or the execution of an activity.

When all the prerequisites of the action execution are satisfied, a signal is generated from the arguments and is transmitted to the identified target object. The target object may be local or remote. If input of the action is already a signal, send object action should be used instead.

The sender of the signal (aka "requestor") continues execution immediately, without waiting for any response. Send signal action receives no reply from the invoked behavior. Any attempt to reply is simply ignored, and no transmission is performed back to the sender.

The manner of transmitting the signal, the amount of time required to transmit it, the order in which the transmissions reach the various targets, and the path for reaching the targets are undefined in . The signal instance may be copied during transmission, so identity might not be preserved.

When a transmission arrives at a target object, it may invoke behavior in the target object. The effect of receiving a signal object is specified in Common Behaviors. Such effects include executing activities and firing state machine transitions.

Send signal action is notated as convex pentagon. Note, that the name of the action corresponds to the name of signal class it sends. Target object is not specified with this notation. 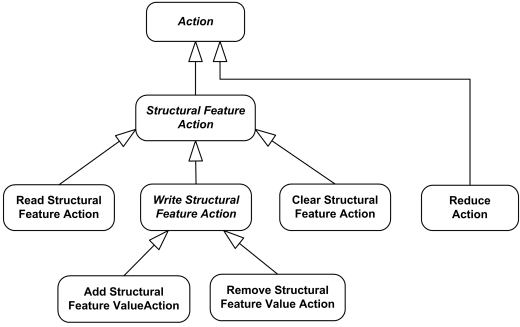 Note, that in UML 2.4 specification reduce action is direct subclass of action. 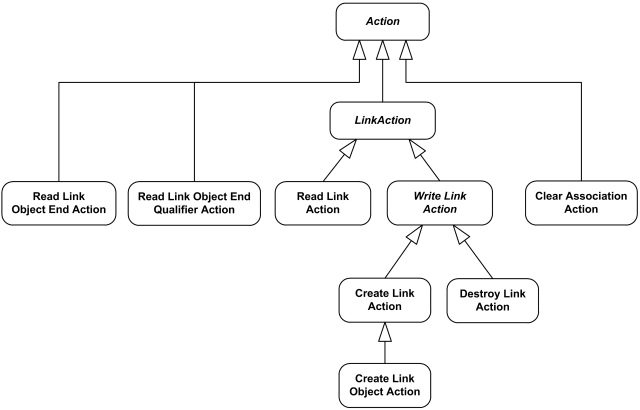 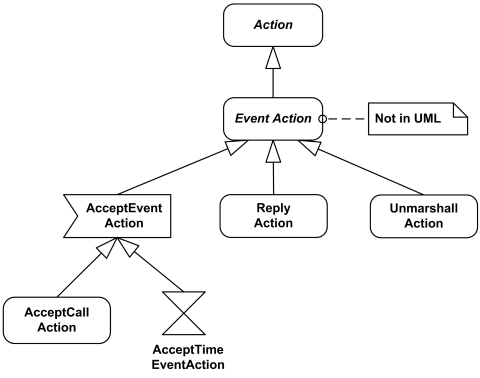 Accept event action handles events detected by the object owning the executing behavior. Events are stored by the object in some queue. The order of detected events is not defined by the UML specification, but it could be specified in extensions or profiles.

In a system with concurrency, several actions or other behaviors might compete for an available event. Only one action accepts event, unless otherwise specified by an extension or profile, even if the event would satisfy multiple concurrently executing actions.

Accept signal action is informal name for the accept event action whose trigger is a signal event. It corresponds to send signal action.

If the event is a time event occurrence, the result value contains the time at which the occurrence happened. Such an action is informally called a wait time action.