Activity diagram is UML behavior diagram which shows flow of control or object flow with emphasis on the sequence and conditions of the flow. The actions coordinated by activity models can be initiated because other actions finish executing, because objects and data become available, or because some events external to the flow occur.

You can find some activity diagram examples here:

Activity is a parameterized behavior represented as coordinated flow of actions.

The flow of execution is modeled as activity nodes connected by activity edges. A node can be the execution of a subordinate behavior, such as an arithmetic computation, a call to an operation, or manipulation of object contents. Activity nodes also include flow of control constructs, such as synchronization, decision, and concurrency control. Activities may form invocation hierarchies invoking other activities, ultimately resolving to individual actions. In an object-oriented model, activities are usually invoked indirectly as methods bound to operations that are directly invoked.

Activity contains activity nodes which could be:

There are actions that invoke activities - either directly using call behavior action or indirectly with call operation action.

Activity could be rendered as round-cornered rectangle with activity name in the upper left corner and nodes and edges of the activity inside the border. UML 2.4 specification examples show activity name in bold. 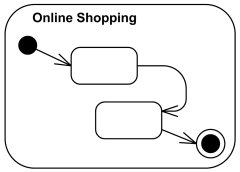 Activity parameters are displayed on the border and listed below the activity name as:
parameter-name: parameter-type. 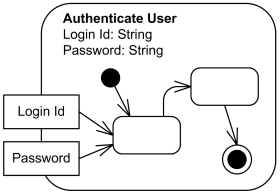 As a behavior activity could have pre- and post-condition constraints. If present, these are shown with the keywords «precondition» and «postcondition», respectively.

The keyword «singleExecution» is used for activities that execute as a single shared execution (singleton), otherwise, each invocation executes in its own space.

The round-cornered activity border may be replaced with the frame notation for diagrams. The kind of the frame in this case is activity or act in short form. Activity parameters if any are displayed on the frame.

The notation for classes with the keyword «activity» can be used to show the features of a reflective activity, to indicate it is an activity class. Association and state machine notation can also be used as necessary.

UML allows behaviors to produce tokens that are activities and which can in turn be executed at the runtime.

An activity partition is activity group for actions that have some common characteristic.

Partitions often correspond to organizational units or business actors in a business model.

Partitions provide a constrained view on the behaviors invoked in activities. Constraints could be selected according to the type of the element that the partition represents. The following constraints are normative (standard) in UML 2.4:

For example, partitions could represent specific classifiers. In this case actions in each partition should be operations or signals targeting objects that are instances of the corresponding classifier.

Activity partition may be shown using a swimlane notation - with two, usually parallel lines, either horizontal or vertical, and a name labeling the partition in a box at one end. Any activity nodes, e.g. actions and edges placed between these lines are considered to be contained within the partition. 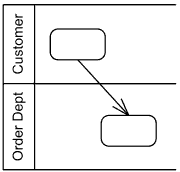 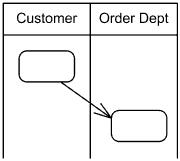 Hierarchical partitioning is represented using swimlanes for subpartitions as illustrated below. 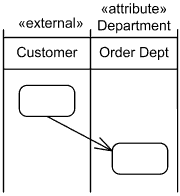 A partition may be marked as a dimension for its subpartitions to contain (group) those subpartitions along dimension. For example, an activity may have one dimension of partitions for location at which the contained behaviors are carried out, and another for the cost of performing them. Dimension partitions cannot be contained by any other partition.

Diagrams can also be partitioned multidimensionally, where each swim cell is an intersection of multiple partitions. The partitions within each dimension may be grouped into an enclosing activity partition with isDimension=true, whose name is the dimension name. Rather than being shown as a partition itself, however, the dimension is indicated by placing its name along side the set of partitions in the dimension.

When activities are considered to occur outside the domain of a particular model, the partition can be labeled with the keyword «external». Whenever an activity in a swimlane is marked «external», this overrides the swimlane and dimension designation.

In the situations when swimlanes can't be used to show partitions, alternate text notation with qualified action name could be used instead. In this case partition name is placed in parenthesis above the action name. A comma-delimited list of partition names means that the node is contained in more than one partition. A double colon within a partition name indicates that the partition is nested, with the larger partitions coming earlier in the name.

Activity Edge is an abstract class for the directed connections along which tokens or data objects flow between activity nodes. It includes control edges and object flow edges. The source and target of an edge must be in the same activity as the edge.

Edges can be named, however, edges are not required to have unique names within an activity. If the edge has a name, it is notated near the arrow.

Activity edge can have a guard - specification evaluated at runtime to determine if the edge can be traversed. The guard must evaluate to true for every token that is offered to pass along the edge.

The guard of the activity edge is shown in square brackets that contain the guard.

Fill Order when priority is 1

An activity edge can be notated using a connector, which is a small circle with a name inside. Though UML 2.4 specification calls it name of the edge, provided connector notation and examples suggest that connector has its own name (also called label).

Connectors are generally used to avoid drawing a long edge. This is purely notational. It does not affect the underlying model. The circles and lines involved map to a single activity edge in the model. Every connector with a given label must be paired with exactly one other with the same label on the same activity diagram. One connector must have exactly one incoming edge and the other exactly one outgoing edge, each with the same type of flow, object or control.

An object flow is notated by an arrowed line.

The weight of the edge may be shown in curly braces that contain the weight. The weight is a value specification, which may be a constant, that evaluates to a non-zero unlimited natural value. An unlimited weight is notated as "*".

An option for notating an interrupting edge is a zig zag adornment on a straight line.