Part is a property which is contained by classifier using composition. It means that all parts are destroyed when the containing classifier instance is destroyed. 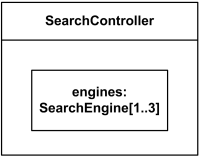 The part or property box has only a name compartment, which contains a string according to the syntax defined for property from Kernel. Details may be shown within the box indicating specific values for properties. 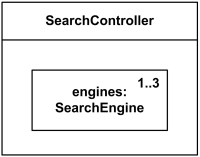 A property symbol may be shown containing just a single name (without the colon) in its name string. This implies the definition of an anonymously named class nested within the namespace of the containing class.

A property which specifies an instance that is not owned using composition by the instance of the containing classifier is shown by graphical nesting of a box symbol with a dashed outline. 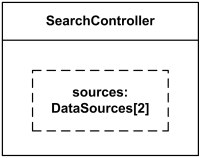