Component realization is specialized realization dependency used to (optionally) define classifiers that realize the contract offered by a component in terms of its provided interfaces and required interfaces.

A component’s behavior may typically be realized (or implemented) by a number of Classifiers. In effect, it forms an abstraction for a collection of model elements. In that case, a component owns a set of component realization dependencies to these classifiers.

A component realization is notated in the same way as the realization dependency, i.e., as a general dashed line from implementing classifiers to realized component with hollow triangle as an arrowhead.

For the purpose of applications that require multiple different sets of realizations for a single component specification, a set of standard stereotypes are defined in the UML Standard Profile. In particular, «Specification» and «Realization» are defined there for this purpose.

Component could be shown using internal view or "white-box" view exposing its private properties and realizing classifiers. This view shows how the external behavior is realized internally. The realizing classifiers could be listed in an additional «realizations» compartment. Compartments may also be used to display a listing of any parts and connectors, or any implementing artifacts. 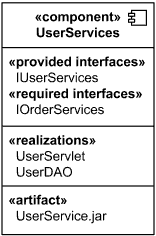 White box view of User Services component - it is realized by UserServlet and UserDAO and manifested by UserService.jar artifact

Alternatively, the internal classifiers that realize the behavior of a component may be displayed nested within the component shape.