A component is a class representing a modular part of a system with encapsulated content and whose manifestation is replaceable within its environment.

A component has its behavior defined in terms of provided interfaces and required interfaces (potentially exposed via ports).

Component serves as a type whose conformance is defined by these provided and required interfaces (encompassing both their static as well as dynamic semantics). One component may therefore be substituted by another only if the two are type conformant.

Larger pieces of a system’s functionality may be assembled by reusing components as parts in an encompassing component or assembly of components, and wiring together their required and provided interfaces.

A component is modeled throughout the development life cycle and successively refined into deployment and run-time. A component may be manifested by one or more artifacts.

Indirectly instantiated component is defined at design time but does not exist as addressable object at execution time. Runtime behavior of the component and its ports is defined by the runtime behavior of classifiers or parts realizing it. Several standard stereotypes assume this attribute, e.g., «Specification», «Focus», «Subsystem».

Internals of component are hidden and inaccessible other than as provided by its interfaces. Although it may be dependent on other elements in terms of interfaces that are required, a component is encapsulated and its dependencies are designed such that it can be treated as independently as possible.

A component is shown as a classifier rectangle with the keyword «component».

Optionally, a component icon similar to the UML 1.4 icon can be displayed in the top right corner of the component rectangle. If the icon symbol is shown, the keyword «component» may be omitted.

A component may be manifested by one or more artifacts, and in turn, that artifact may be deployed to its execution environment. A deployment specification may define values that parameterize the component’s execution.

A provided interface is the one that is either

A required interface is either

A component has an external view or "black-box" view by means of interface symbols sticking out of the component box exposing its publicly visible properties and operations.

Optionally, a behavior such as a protocol state machine may be attached to an interface, port, and to the component itself, to define the external view more precisely by making dynamic constraints in the sequence of operation calls explicit. Other behaviors may also be associated with interfaces or connectors to define the "contract" between participants in a collaboration (e.g., in terms of use case, activity, or interaction specifications).

Alternatively, the interfaces and/or individual operations and attributes can be listed in the compartments of a component box (for scalability, tools may offer a way of listing and abbreviating component properties and behavior).

For displaying the full signature of an interface of a component, the interfaces can also be displayed as typical classifier rectangles that can be expanded to show details of operations and events.

There are several standard UML stereotypes that apply to components:

Component notation as a classifier rectangle with «component» keyword was introduced in UML 2.0.

In the previous versions of UML 1.x notation for component was a rectangle with two small rectangles protruding from its side. For backward compatibility reasons, this notation may still be used in UML 2.5.

In UML 1.4.2 stereotype «entity» represented a passive class, i.e. class whose objects do not initiate interactions on their own. «Entity» became a persistent information component in UML 2.0.

Stereotype «process» specified a classifier representing a heavy-weight flow of control in UML 1.4.2. «Process» became a transaction based component in UML 2.0.

In UML 1.4.2 «subsystem» is a special kind of a package used to represent a behavioral unit in the physical system, and hence in the model, and to serve as a specification unit for the behavior of its contained model elements. «Subsystem» became a component stereotype to represent unit of hierarchical decomposition for large systems in UML 2.0. 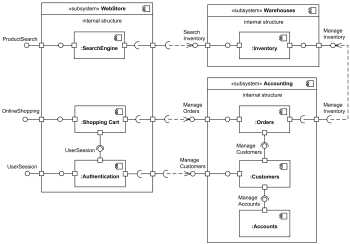 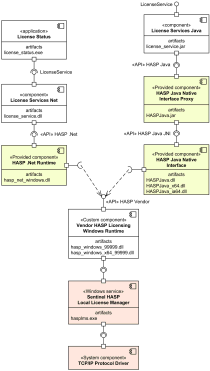