UML standard has no separate kind of diagrams to describe network architecture and provides no specific elements related to the networking. Deployment diagrams could be used for this purpose usually with some extra networking stereotypes. Network architecture diagram will usually show networking nodes and communication paths between them.

The example of the network diagram below shows network architecture with configuration called "two firewall demilitarized zone". Demilitarized zone (DMZ) is a host or network segment located in a "neutral zone" between the Internet and an organization’s intranet (private network). It prevents outside users from gaining direct access to an organization’s internal network while not exposing a web, email or DNS server directly to the Internet.

Note that this diagram uses networking icons that are not part of the UML standard. UML's standard for the node or device is a 3-dimensional view of a cube.

None of these devices are defined in UML standard so most of the descriptions and examples below use networking icons and descriptions provided by Microsoft as part of the blueprints.

Hub is a network device that links network components such as workstations and servers at OSI layer 1 (L1). Hub contains a port for each network device and copies data received on one port to every other port whether required or not. Because of this data transmissin collisions are very likely.

Hubs are no longer considered as network components in the Microsoft WSSRA (see Microsoft Network Devices Blueprint [MSNAB 05] ) as they have largely been replaced by switches.

Hubs could still be used in some cases such as networking between members of server clusters supporting the heartbeat mechanism of cluster nodes.

Switch is a network device that moves network packets from one device to another at OSI layer 2. Switching devices can determine MAC addresses of the packets destination devices by monitoring network traffic. Once destination addresses are determined, switches can send specific packets to the port that connects to the network adapter with a specific MAC address. (Hubs send every packet to all the ports.)

Enterprise-level switches could have the capability to route packets at OSI layer 3 between network segments, and thus could be used as routers.

Router is a network device that moves data packets from one network segment to another based on OSI layer 3 addresses. Routing devices are capable to exchange information with other routers on the network to determine the most efficient path from one device to another.

Load balancer is a network device that facilitates horizontal clustering, where multiple servers are configured to perform the same function on the network. The load balancing functionality may be provided by software or a hardware device in one of two ways:

Firewall is a network device that controls the flow of traffic between network segments using OSI layer 3 addresses in order to meet security requirements. Firewall services could be implemented by a dedicated hardware device (particularly to protect the boundary between the internal network and the Internet), or by a network host running software firewall.

A network segment is defined as two or more devices that communicate with each other at OSI layer 2 (L2) using L2 LAN connectivity devices with no routing at L3 between them. (Microsoft Network Architecture Blueprint [MSNAB 05])

Network segments may be physical or logical (virtual). Logical segments are referred to as virtual local area networks (VLANs).

L2 LAN connectivity devices are moving data packets at OSI layer 2 between hosts or devices on the same network segment. This functionality is typically provided by a switch.

Wide area networks are formed by joining one or more LANs through WAN devices and technologies. The endpoint WAN connectivity devices are generally owned by the organization, but the devices in between are usually owned by telephone carriers.

Backbone is the link that connects multiple switches together. 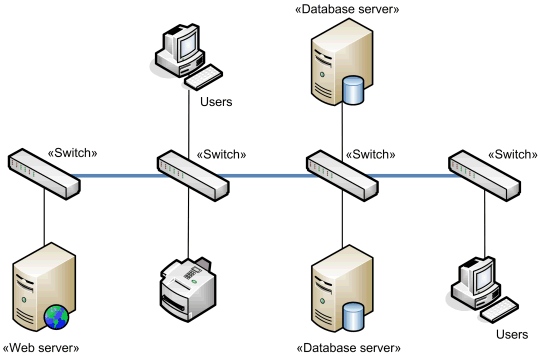 Backbone is usually scaled to allow multiple simultaneous conversations between networked computers and servers to match the speed and number of devices on it. For example, the backbone may be sized at 1 gigabits per second (Gbps) to allow multiple 100 Mbps conversations to occur over the backbone between client computers and servers connected to the switches at 100 Mbps.

Multiple network adapters on the same device allow to separate traffic for better performance or/and for stronger security. Examples of multihoming are public firewall with separate network interfaces for applying security rules and routing, and perimeter web server with several network interfaces to separate perimeter and internal traffic, and to allow front interface for load balancing.