An artifact is a classifier that represents some physical entity, a piece of information that is used or is produced by a software development process, or by deployment and operation of a system. Artifact is a source of a deployment to a node. A particular instance (or "copy") of an artifact is deployed to a node instance.

Some real life examples of UML artifacts are:

Standard stereotypes can be further specialized into implementation and platform specific stereotypes in profiles. For example, Java profile might define «jar» as a subclass of «executable» for executable Java archives. Specific profiles are expected to provide some stereotype for artifact representing sets of files. 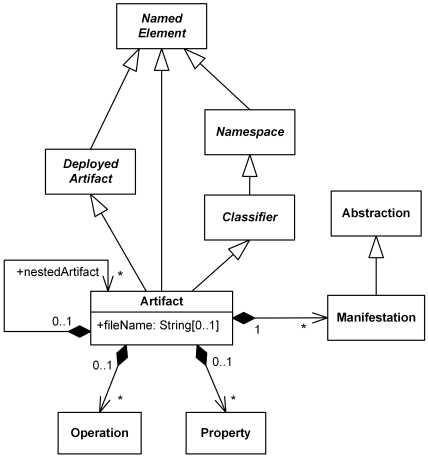 Artifacts may have properties that represent features of the artifact, and operations that can be performed on its instances. Artifacts have fileName attribute - a concrete name that is used to refer to the artifact in a physical context - e.g. file name or URI. Artifact could have nested artifacts.

Alternatively, artifact may be depicted by an icon.

Optionally, the underlining of the name of an artifact instance may be omitted, as the context is assumed to be known to users. 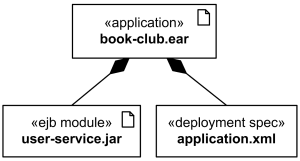 Artifacts can be involved in dependency relationship with other artifacts.

Dependency between artifacts is notated in the same way as general dependency, i.e. as a general dashed line with an open arrow head directed from client artifact to supplier artifact.