Nodes represent either hardware devices or software execution environments. They could be connected through communication paths to create network systems of arbitrary complexity. Artifacts represent concrete elements in the physical world that are the result of a development process and are deployed on nodes.

You can find some deployment diagrams examples here:

Note, that since UML 2.0 artifacts can manifest any packageable elements, not just components as it was in previous versions of UML.

The artifact owns the manifestations, each representing the utilization of a packageable element.

Specific profiles are expected to stereotype the manifestation relationship to indicate particular forms of manifestation. For example, «tool generated» and «custom code» might be two manifestations for different classes embodied in an artifact.

A manifestation is notated in the same way as abstraction, i.e. as a dashed line with an open arrow head directed from artifact to packageable element, (e.g. to component or package) and is labeled with the keyword «manifest». 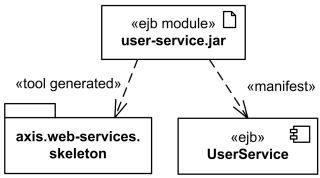 In UML 1.x, the concept of manifestation was referred to as implementation and annotated as «implement». Since this was one of the many uses of the word "implementation" this has been replaced in UML 2.x by «manifest». 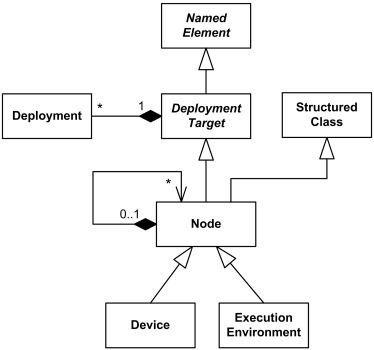 Instance specification was extended in UML 2.0 to allow instance of a node to be deployment target in a deployment relationship.

Property was also extended in UML 2.0 with the capability of being a deployment target in a deployment relationship. This enables modeling the deployment to hierarchical nodes that have properties functioning as internal parts.

Deployment target owns the set of deployments that target it.

Deployment target has no specific notation by itself, see notations for subclasses.

Node is a deployment target which represents computational resource upon which artifacts may be deployed for execution.

Node is shown as a perspective, 3-dimensional view of a cube.

Node is associated with deployments of artifacts and indirectly with packageable elements that are involved in the manifestations by the artifact that is deployed on the node.

Node is specialized by: 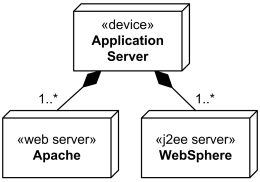 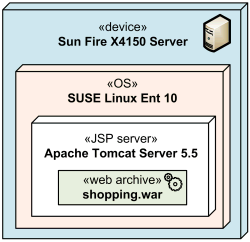 A device is a node which represents a physical computational resource with processing capability upon which artifacts may be deployed for execution.

A device is rendered as a node (perspective, 3-dimensional view of a cube) annotated with keyword «device».

Device may be depicted using custom icon. Profiles, stereotypes, and tagged values could be used to provide custom icons and properties for the devices. 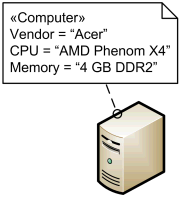 Devices may be complex (i.e., they may consist of other devices) where a physical machine is decomposed into its elements, either through namespace ownership or through attributes that are typed by devices.

Execution environment is notated the same way as a node (perspective, 3-dimensional view of a cube), annotated with the standard UML stereotype «executionEnvironment».

This «executionEnvironment» is pesky sesquipedalian to use. UML provides no other standard stereotypes for execution environments. Examples of reasonable non-normative stereotypes are:

A communication path is association between two deployment targets, through which they are able to exchange signals and messages.

Communication path is notated as association, and it has no additional notation compared to association.

Note, that when deployment targets are some physical devices, communication path will typically represent a physical connection between the nodes.

Gigabit Ethernet as communication path between application and database servers.

When deployment targets are execution environments, communication path will typically represent some protocol.

A component deployment is deployment of one or more artifacts or artifact instances, optionally parameterized by a deployment specification.

It is not very clear why UML defines deployment as a dependency, and not as an association or just a directed relationship. The major contradiction is that dependency in UML does not have any runtime implications, and is defined in terms of the model elements, not in terms of their instances. At the same time UML 2.4 allows and shows examples of instances of artifacts deployed to instances of nodes.

Deployment could be shown as a dependency that is drawn from the artifact (supplier) to the deployment target (client) and is labeled with «deploy». Note, that dependency usually points from the client to the supplier, i.e. in the direction opposite to what is recommended by UML 2.4 for deployment. On the other hand, UML specification allows to change direction for a dependency based on user's stipulations.

At the "instance level" instances of artifacts could be deployed to specific instances of the deployment target. The underlining of the name of artifact instance may be omitted. 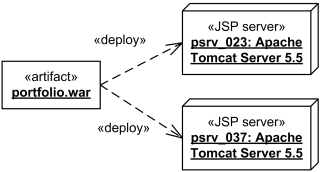 For modeling complex deployment target models consisting of nodes with a composite structure defined through "parts," a property (that functions as a part) may also be the target of a deployment.

Deployment could be shown with deployed artifacts contained by a deployment target.

Deployment could be shown using textual list of deployed artifacts within a deployment target.

Deployment could be shown within a rectangular frame with deployment name in a compartment in the upper left corner. The long form name for the diagram heading is deployment and abbreviated form is dep.

An instance of a deployment specification with specific values for deployment properties may be contained in a complex artifact.

A deployment specification could be displayed as a classifier rectangle attached to a component artifact using a regular dependency arrow pointing to deployed artifact.

Note, that UML 2.4 specification shows this association as a dashed line (while association is normally displayed as solid line.) 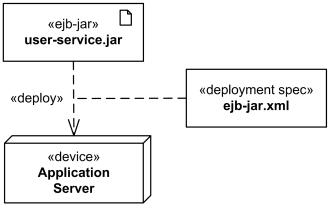