An extension is association relationship used to indicate that the properties of a metaclass are extended through a stereotype, and gives the ability to flexibly add stereotypes to classes and remove later, if necessary.

Extension end is a navigable end, owned by extension. This allows a stereotype instance to be attached to an instance of the extended classifier without adding a property to the classifier. Note, that until UML 2.3 extension end was "never navigable".

The notation for an extension is an arrow with the filled triangle arrowhead pointing from a stereotype to the extended metaclass.

Because extension is subclass of association, it may have usual association adornments, but navigability arrows should not be shown. Adornments of an extension are typically suppressed.

By default, extension is non-required. When extension has no adornments, it could either mean the default value or that the {required} adornment was suppressed. Multiplicity 0..1 on the extension end could be used as an alternative to non-required extension.

Required extension is shown using the {required} property near the extension end.

It is also allowed to use multiplicity 1 on the extension end as an alternative to the {required}.

A metaclass may be extended by one or more stereotypes. This is obvious and expected.

Each stereotype may extend one or more metaclasses. This might cause some confusion. For example, UML 2.3 specification explains its Figure 18.16 as "the same stereotype Clock can extend either the metaclass Component or the metaclass Class." Either is confusing as it suggests that extension is kind of or relationship but not and as we'd assume. 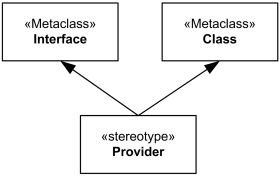 Stereotype Provider extends either (or both?) Interface or Class metaclasses.