Most of these concepts are abstract, have no graphical notation, and thus not used directly on UML diagrams, but they are important for understanding of how UML is organized.

Element is the abstract root UML metaclass, it has no superclass in the hierarchy of UML elements. It is the superclass for all metaclasses in the UML infrastructure library. 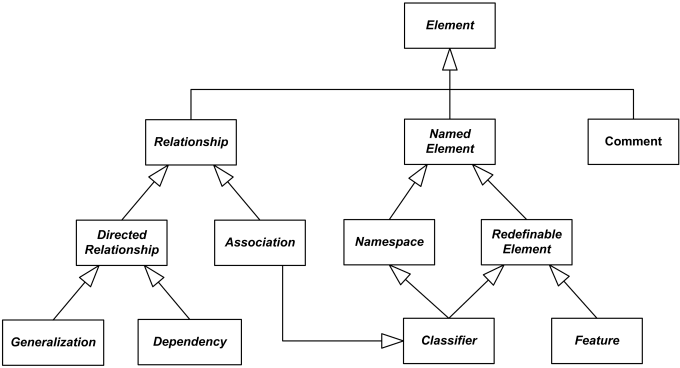 Some subclasses of UML Element

There is no general notation for an element. The specific subclasses of element define their own notation.

UML 2.x specifications use words "owns", "ownership", "contains", "container" all over the text without providing proper explanation what those terms mean. Here's my guess about the mysterious ownership relationship.

Each UML element has a composition relationship to itself to support the capability for elements to own other elements.

Each UML element has composition to itself
- it could own other elements.

Note, that any UML element may not directly or indirectly own itself.

When UML specification defines a namespace, it says in one place that the namespace "contains a set of named elements" while in the other - that it "can own other named elements". From that we can draw a conclusion that - at least for the namespaces - ownership and containment are close to be synonyms (but most likely element that is contained is not necessarily owned).

Named element is an abstract element that may have a name. The name is used for identification of the named element within the namespaces in which it is defined or accessible.

UML specification allows named element to be anonymous, i.e. to have no name. Also, the absence of the name is considered to be different from the element having empty name.

Some subclasses of the named element are:

In previous versions of UML, a leaf class was shown with the property "{leaf}" below the class name. (The presence of a keyword for a Boolean type without a value implies the value true.)

In UML 2.3 the metaattribute isLeaf has been replaced by isLeaf property of redefinable element but the specification provides no notation for the elements having this property as true.

Some subclasses of redefinable element are: 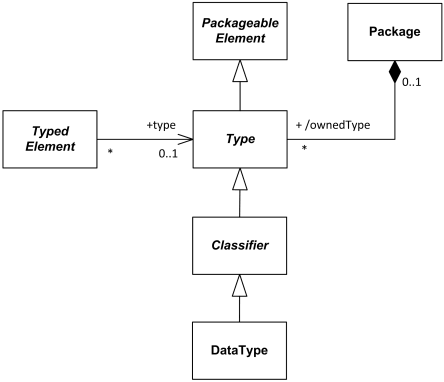 Type is UML metaclass used as a constraint on the range of values
represented by associated typed element.

Both type and typed element are abstract UML metaclasses and have no notation.

Feature represents a structural or behavioral characteristic of a classifier or of instances of classifiers. 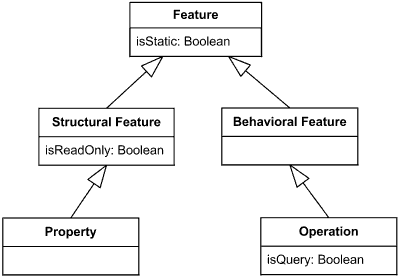 Features of a class are attributes (structural features) and operations (behavioral features).

Features have no general notation. Subclasses define their specific notation.

An ellipsis (...) as the final element of a list of features indicates that additional features exist but are not shown in that list.

Static feature represents some characteristic of the classifier itself.

Static feature could have one of two alternative semantics:

Because of this, inheritance of values for static features is permitted but not required by UML 2.

Names of static features are underlined.

A property is an example of structural feature.

Structural features are not read only by default, but at the same time UML specification allows to suppress {readOnly} annotation on UML diagrams. If {readOnly} was suppressed, it is not possible to determine whether static feature is read only or not from the diagram.

An operation is an example of behavioral feature.

Instance is some system entity, concrete manifestation (implementation) of an abstraction. Abstraction could be represented by one or more classifiers or no classifiers at all. We typically use/have instances of:

Instance usually takes up some space or memory slots in the real or software world, and it could be in some state as a result of applied operation(s).

An instance specification is UML packageable element that represents some instance in a modeled system.

Instance specification describes instance with appropriate degree of details, either partially or completely. The description may include:

Instance could have a name or be anonymous when name is not important. Instance name allows to distinguish the instance from other instances within the same naming context (scope).

UML 2.4 provides neither syntax BNF rules nor even verbal rules for instance names. There are as well just a few examples. It is common for the name to be a short noun or noun phrase, a sequence of letters, digits, and some punctuation marks (e.g. colon is usually excluded). I made up some BNF below, because there are some other things to keep in mind.

Names are optional both for instance specifications and for UML classifiers.

Anonymous instance of the Customer class.

In some cases, classifier of the instance is unknown or not specified. When instance name is also not provided, the notation for such an anonymous instance of an unnamed classifier is simply underlined colon - :.

Instance newPatient of the unnamed or unknown class.

Instance could have instance name, classifier and namespace (package) specified, all optional. The convention for showing multiple classifiers is to separate their names by commas.

If an instance has some value, the value specification is shown either after an equal sign ('=') following the instance name, or without the equal sign below the name.

Slots are shown as structural features with the feature name followed by an equal sign ('=') and a value specification. Type (classifier) of the feature could be also shown.

Relationship is an abstract element which represents a concept of some kind of relationship between UML elements.

A relationship references one or more related elements.

There is no general notation for a relationship. In most cases the notation is some kind of a line connecting related elements. Specific subclasses of the relationship define their own notation.

Subclasses of relationship are:

Since UML 2.0, only association is still categorized as semantic relationship by UML specification, while constraint became packageable element and dependency is now supplier/client relationship. IBM/Rational website defines association as both structural and semantic relationship where "semantic" means that there could be "connections among ... instances" and "structural" - that "objects of one thing are connected to objects of another thing". Try to find a difference, assuming objects and instances are synonyms!

I could guess that semantic relationship is a relationship where there is some nonmaterial association or link (in common sense) between objects, without having any physical links - as a car could be semantically related to car company producing it or a player to the team he plays for - but we'll need to wait on UML authors either to stop using decorative words irresponsibly or to explain themselves properly.

Subclasses of the directed relationship are:

A comment (aka note) is an element which represents a textual annotation (remark, comment) that can be attached to another element or a set of elements. A comment adds no semantics to the elements, but it may contain some information that is useful to a modeler or to a reader of UML diagram and which usually can't be expressed with other UML elements.

A comment is shown as a rectangle with the upper right corner bent - "note symbol". The rectangle contains the body of the comment. Comment is connected to each annotated element by a dashed line.

Comment explaining clinical document and its relationship to patient

The dashed line connecting the comment to the annotated element(s) may be suppressed if it is clear from the context, or not important in the diagram.