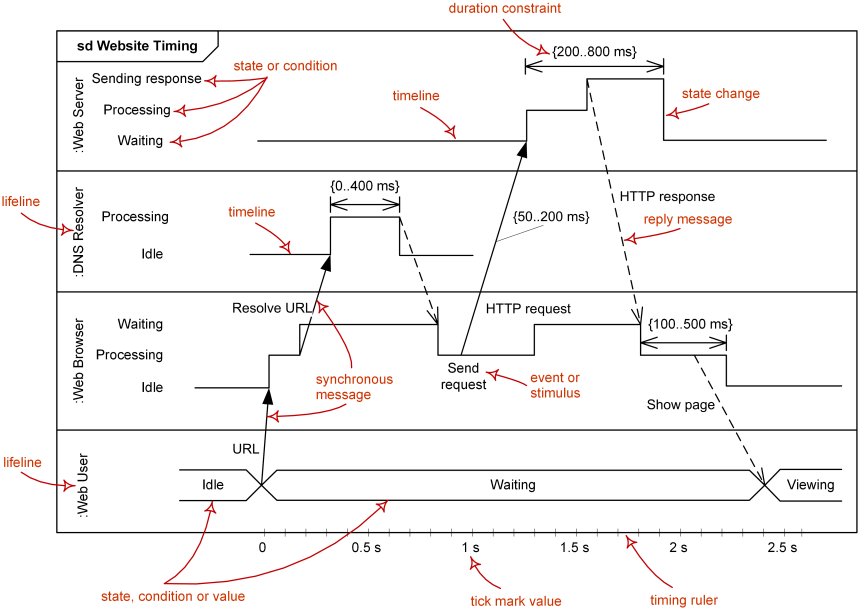 You can find some timing diagram examples here:

Lifeline is a named element which represents an individual participant in the interaction. While parts and structural features may have multiplicity greater than 1, lifelines represent only one interacting entity. See lifeline from sequence diagrams for details.

Lifeline on the timing diagrams is represented by the name of classifier or the instance it represents. It could be placed inside diagram frame or a "swimlane". 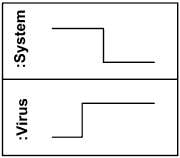 Timing diagram could show states of the participating classifier or attribute, or some testable conditions, such as a discrete or enumerable value of an attribute.

UML also allows the state/condition dimension be continuous. It could be used in scenarios where entities undergo continuous state changes, such as temperature or density.

The semantics of a duration constraint is inherited from constraints. If constraints are violated, traces become negative which means that system is considered as failed.

Duration constraint is shown as some graphical association between a duration interval and the constructs that it constrains.

Ice should melt into water in 1 to 6 minutes

The semantics of a time constraint is inherited from constraints. All traces where the constraints are violated are negative traces, i.e., if they occur, the system is considered as failed.

The destruction event is depicted by a cross in the form of an X at the end of a timeline.