A class is shown as a solid-outline rectangle containing the class name, and optionally with compartments separated by horizontal lines containing features or other members of the classifier.

As class is the most widely used classifier, there is no need to add the "class" keyword in guillemets above the class name. Class name should be centered and in bold face, with the first letter of class name capitalized (if the character set supports upper case).

Features of a class are attributes and operations.

With regard to static features, two alternative semantics are recognized. Static feature may have:

In accordance with this semantics, inheritance of values for static features is permitted but not required by UML 2.

Static features are underlined - but only the names. An ellipsis (...) as the final element of a list of features indicates that additional features exist but are not shown in that list.

Attributes of a class are represented by instances of property that are owned by the class. Some of these attributes may represent the navigable ends of binary associations.

Objects of a class must contain values for each attribute that is a member of that class, in accordance with the characteristics of the attribute, for example its type and multiplicity.

Attributes or operations may be grouped by visibility. A visibility keyword or symbol in this case can be given once for multiple features with the same visibility. 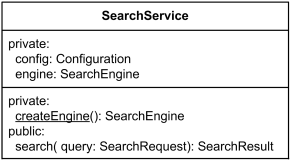 Additional compartments may be provided to show other details, such as constraints, or just to divide features.

A class in the UML could be used as a namespace for other classifiers including classes, interfaces, use cases, etc. Nested classifiers are visible only within the namespace of the containing class.

UML 2.4 provides no explanation of the "incomplete class declaration" and whether it is related to the concept of abstract operation - which was also present in UML 1.4.2 and is absent in UML 2.x.

Attempting to create an instance of an abstract class is undefined - some languages may make this action illegal, others may create a partial instance for testing purposes.

The name of an abstract class is shown in italics.

An abstract classifier can also be shown using the keyword {abstract} after or below the name.

There are several standard UML stereotypes that apply to classes:

Note, that naming convention for stereotypes and applied stereotypes was changed in UML 2.4.1 to have the first letter in upper case. You will still see stereotypes in lower case, e.g. «focus», «type», everywhere as it will take some time to switch to the new notation.

These class stereotypes are part of the Analysis Profile in RSA which is applied by default with the Analysis Model template. The stereotypes roughly correspond to the parts of the Model-View-Controller (MVC) design pattern, where Boundary represents View, Control is Controller, and Entity corresponds to the Model.

UML classes could be templated or bound. 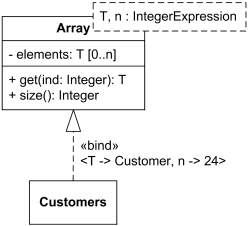