Class or interface could nest (contain) other classifiers.

Now obsolete UML 1.4.2 Specification defined nested class as a class declared within another class and belonging to the namespace of the declaring class. Relationship between those classes was called "namespace owned element association".

Nested classifier, e.g. nested class, nested interface, or nested use case could be used like any other classifier but only inside the containing class or interface.

Per UML 1.4.2 a declaring (nesting) class and a nested class could be shown connected by a line, with an "anchor" icon on the end connected to the declaring class. An anchor icon is a cross inside a circle.

UML 2.x specifications - including the recent UML 2.4.1 - describe nesting of classifiers within structured classes without providing explicit notation for the nesting. Note, that UML's 1.4 "anchor" notation is still used in one example in UML 2.4.x for packages as an "alternative membership notation" and without providing any other details or explanations. 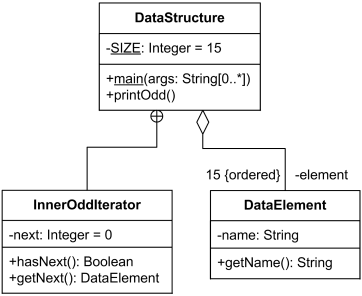 The nesting (owning) of a use case by a classifier is represented using the standard notation for nested classifiers.