A property is a structural feature which could represent

As a structural feature, property represents some named part of the structure of a classifier. For example, Patient class could have id, name, gender, date of birth, etc. as its properties. 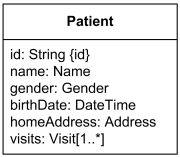 The general syntax for properties is shown below:

Forward slash '/' means that the property is derived.

The property-type is the type of the property represented by the name of classifier.

Property could have multiplicity. The multiplicity bounds constrain the size of the collection of property values. By default the maximum bound is 1.

The default-value option is an expression for the default value or values of the property.

Property may have optional modifiers:

Older UML 1.x specifications, e.g. UML 1.4.2 Specification, defined attribute as a named slot within a classifier that describes a range of values that instances of the classifier may hold."

In UML 2.x a property owned by a classifier represents an attribute of the classifier. Context of the attribute is the owning classifier.

For example, Patient class may have id, name, gender, date of birth, etc. as its attributes.

UML specification very vaguely describes ownership of (non static) attribute as some relationship when the value or values related to the instance of the classifier are being held in the slots of the instance.

In programming we would call this kind of mapping as memory slots or storage. In plain English, attributes of classifier are stored in slots of the classifier.

Attribute Vs. Member End of Composition or Association

Specifications and User Guides of the older UML 1.x versions considered attribute as a shortcut or semantic equivalent of the composition. For example, UML 1.4.2 Specification explained:

Note that an attribute is semantically equivalent to a composition association; however, the intent and usage is normally different.

(It would be really helpful to see some explanation of what exactly that snobbish "normally different intent and usage" might mean, so the next citation provides some clue.)

The class symbol may be thought of as an example of the composition nesting notation (with some special layout properties). However, attribute notation subordinates the attributes strongly within the class; therefore, it should be used when the structure and identity of the attribute objects themselves is unimportant outside the class.

In UML 1.x they also called it "different ways to show composition", so that the example of the Patient class with attributes shown above could be also rendered using composition instead of some attributes. 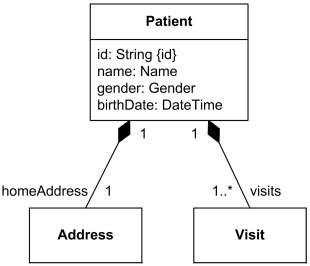 Address and visits attributes of the Patient class
shown here as two compositions, as allowed by UML 1.x.

UML 2.x specifications allow to show an attribute using notation for association, so that that previous example of the Patient class could be rendered in UML 2.5 as shown below. Address and visits attributes of the Patient class
may be shown using association notation in UML 2.x.

When a property is an association end, the value or values of the property are related to the instance or instances at the other end(s) of the association.

UML standard does not mandate the use of explicit end-ownership notation, but defines a default. When dot notation is not used in binary association, association ends are assumed to be owned by association.

Member End of Association Vs. Attribute

A property may have other properties (attributes) that serve as qualifiers. A qualifier is a property which defines a partition of the set of associated instances with respect to an instance at the qualified end. (And probably more appropriate name for qualifier would be selector or key.)

Qualifiers are used to model hash maps in Java, dictionaries in C#, index tables, etc. where fast access to linked object(s) is provided using qualifier as a hash key, search argument or index.

A qualifier is shown as a small rectangle attached to the qualified classifier also called the source. This qualifier rectangle is part of the association, not part of the classifier. UML does not allow qualifier to be suppressed.

UML allows having a qualifier on each end of a single association.

Given a qualified object and a qualifier instance, the number of objects at the target end of the association is constrained by the declared multiplicity of the target.

Target multiplicity should allow 0 ("no results") if the domain of the qualifier is large or infinite, e.g. number, long string, date. It can be exactly 1 for qualifiers of enumerated or restricted domain.

In the case in which the target multiplicity is 0..1, the qualifier value is unique with respect to the qualified object, and links to at most one associated object.

In the case of target multiplicity 0..*, the set of associated instances is partitioned into possibly empty subsets, each selected by a given qualifier instance.

Target multiplicity should allow 0 if the domain of the qualifier is large or infinite, e.g. number, long string, date.

Given chessboard and specific rank and file we'll locate exactly 1 square.
UML specification provides no lucid explanation of what multiplicity 1 means for qualifier.