A generalization is a binary taxonomic (i.e. related to classification) directed relationship between a more general classifier (superclass) and a more specific classifier (subclass).

Generalization is owned by the specific classifier.

Checking, Savings, and Credit Accounts are generalized by Account

Generalization relationships that reference the same general classifier can also be connected together in the "shared target style."

Checking, Savings, and Credit Accounts are generalized by Account

Inheritance was explained in UML 1.4.2 using the concepts of a full descriptor and a segment descriptor. A full descriptor contains a description of all of the attributes, associations, operations, and constraints that the object contains, and is usually implicit because it is built out of incremental segments combined together using inheritance.

In an object-oriented language, the description of an object is built out of incremental segments that are combined using inheritance to produce a full descriptor for an object. The segments are the modeling elements that are actually declared in a model. They include elements such as class and other generalizable elements. Each generalizable element contains a list of features and other relationships that it adds to what it inherits from its ancestors.

Each kind of generalizable element has a set of inheritable features. For any model element, these include constraints. For classifiers, these include features ( attributes, operations, signal receptions, and methods) and participation in associations. [UML 1.4.2 Specification]

UML 2.5 provides some vague and incomplete explanation of how inheritance works in UML:

Multiple inheritance is implicitly allowed by UML standard, while the standard provides no definition of what it is.

Classifier in UML can have zero, one or many generalization relationships to more general classifiers. In OOAD multiple inheritance refers to the ability of a class to inherit behaviors and features from more than one superclass. 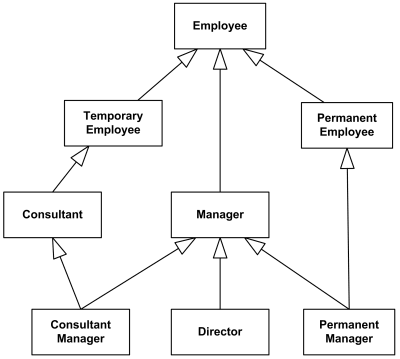 The origin of multiple inheritance could be in orthogonal taxonomies combined together. For example, the diagram above combines two different classifications of employees - one is based on whether employee is permanent or temporary, and another one is based on the position employee holds.

Though UML standard implicitly allows multiple inheritance, it provides no explicit resolutions or recommendations for well known issues and ambiguities, such as the diamond problem. 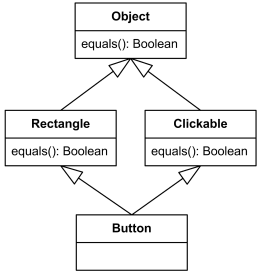 In the multiple inheritance diamond problem example above Button class inherits two different implementations of equals() while it has no own implementation of the operation. When button.equals() is called, it is unknown which implementation - from Rectangle or from Clickable - will be used.

UML profiles allow to specialize the semantics of generalization. For example, in the Java language profile, generalization of classes should be restricted to single inheritance.

Each generalization set has two properties - isCovering (complete or incomplete constraint) and isDisjoint (disjoint or overlapping constraint), to clarify what kind of set it is.

By default, in UML 2.0 to UML 2.4.1 generalization set is {incomplete, disjoint}, while in UML 2.5 default was changed to {incomplete, overlapping}.

Power type specification is shown as colon followed by the name of the power type classifier near the corresponding generalization set. 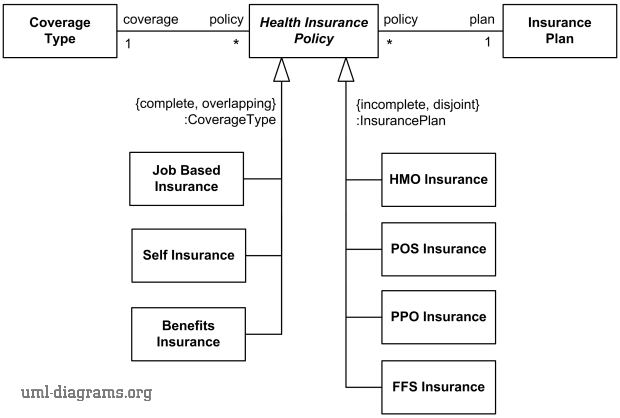