Inheritance is usually explained in OOAD and in UML as some mechanism by which more specific classes (called subclasses or derived classes) incorporate structure and behavior of the more general classes (called superclasses, base classes, or parents). UML is inherently object-oriented modeling language and uses inheritance as one of its fundamental concepts while no UML specification provides appropriate details of how they actually define or interpret inheritance in UML.

Until the UML 2.5 specification, inherited members had no specific notation. In UML 2.5 properties inherited by a classifier from a superclass may be shown on a diagram of the inheriting classifier by prepending a caret '^' symbol to the textual representation of the inherited property. 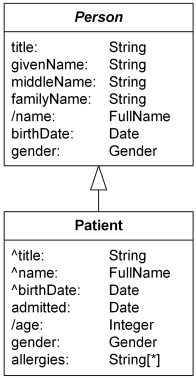 Another inheritance example shows Button class with few attributes inherited from some GUI Control class. Inherited background property represents background image displayed in the control, isSelectable indicates whether the control can be selected. Cursor property gets or sets the cursor that is displayed when the mouse pointer is over the control, font is the font of the text displayed by the control.

The Button class also has own properties - useMnemonic and textAlign. The useMnemonic attribute indicates whether the first character that is preceded by an ampersand (&) is used as the mnemonic key of the button. The default is true. The textAlign property gets or sets the alignment of the text on the button control with the default set as MiddleCenter alignment.

UML 2.5 also allows to show inherited attributes in a lighter color to help visually distinguish them from non-inherited properties. UML tools are not required to support this option. 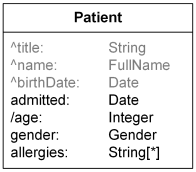