Dependency is a directed relationship which is used to show that some UML element or a set of elements requires, needs or depends on other model elements for specification or implementation. Because of this, dependency is called a supplier - client relationship, where supplier provides something to the client, and thus the client is in some sense incomplete while semantically or structurally dependent on the supplier element(s). Modification of the supplier may impact the client elements.

Dependency is a relationship between named elements, which in UML includes a lot of different elements, e.g. classes, interfaces, components, artifacts, packages, etc. There are several kinds of dependencies shown on the diagram below. 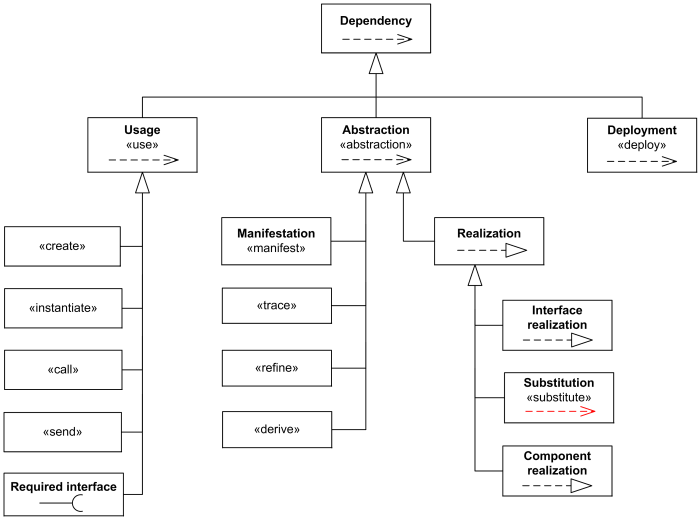 The abstraction relates two elements representing the same concept but at different levels of abstraction.

The deployment is a dependency which shows allocation (deployment) of an artifact to a deployment target. (It is not very clear why UML 2.4.1 defines deployment as a dependency but not as an association or just a directed relationship.)

Note, that UML 2.4.1 specification has some confusing clarification that "the presence of dependency relationships in a model does not have any runtime semantics implications, it is all given in terms of the model-elements that participate in the relationship, not in terms of their instances."

This clarification contradicts to the definition of usage dependency which is implementation dependency. An experienced software developer knows what happens at runtime when some dependency is missing, with application killed by LinkageError or ClassNotFoundException from the class loader. So dependency could in fact have some grave runtime semantics implications.

A dependency is generally shown as a dashed arrow pointing from the client (dependent) at the tail to the supplier (provider) at the arrowhead. The arrow may be labeled with an optional stereotype and an optional name. Because the direction of the arrow goes opposite to what we would normally expect, I usually stereotype it as client «depends on» supplier.

Dependency could be used on several kinds of UML diagrams:

Here's some examples of dependencies:

Note, that abstraction dependency has a convention to have more abstract element as supplier and more specific or implementation element as client but UML specification also allows to draw it the opposite way. 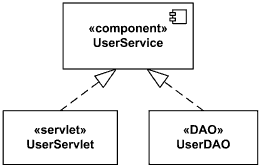 A usage is a dependency relationship in which one element (client) requires another element (or set of elements) (supplier) for its full implementation or operation.

The usage dependency does not specify how the client uses the supplier other than the fact that the supplier is used by the definition or implementation of the client. For example, it could mean that some method(s) within a (client) class uses objects (e.g. parameters) of the another (supplier) class.

A usage dependency is shown as a dependency with a «use» keyword attached to it.

Create is a usage dependency denoting that the client classifier creates instances of the supplier classifier. It is denoted with the standard stereotype «create».

Instantiate is another usage dependency among classifiers indicating that operations on the client create instances of the supplier. It is denoted with the standard stereotype «instantiate».

It is not very clear why UML 2.4 standard has both «create» and «instantiate».

Call is denoted with the standard stereotype «call» whose source is an operation and whose target is also an operation.

This relationship may also be applied to the class containing an operation, with the meaning that there exists an operation in the class to which the dependency applies.

Send is a usage dependency whose source is an operation and whose target is a signal, specifying that the source sends the target signal.

Send is denoted with the standard stereotype «send».

Required interface specifies services that a classifier needs in order to perform its function and fulfill its own obligations to its clients. It is specified by a usage dependency between the classifier and the corresponding interface.

The usage dependency from a classifier to an interface is shown by representing the interface by a half-circle or socket, labeled with the name of the interface, attached by a solid line to the classifier that requires this interface.

If interface is represented using the rectangle notation, interface usage dependency is denoted with dependency arrow. The classifier at the tail of the arrow uses (requires) the interface at the head of the arrow.