A UML diagram is a partial graphical representation (view) of a model of a system under design, implementation, or already in existence. UML diagram contains graphical elements (symbols) - UML nodes connected with edges (also known as paths or flows) - that represent elements in the UML model of the designed system. The UML model of the system might also contain other documentation such as use cases written as templated texts.

UML specification does not preclude mixing of different kinds of diagrams, e.g. to combine structural and behavioral elements to show a state machine nested inside a use case. Consequently, the boundaries between the various kinds of diagrams are not strictly enforced. At the same time, some UML Tools do restrict set of available graphical elements which could be used when working on specific type of diagram.

Behavior diagrams show the dynamic behavior of the objects in a system, which can be described as a series of changes to the system over time.

UML 2.4 diagrams could be categorized hierarchically as shown below: 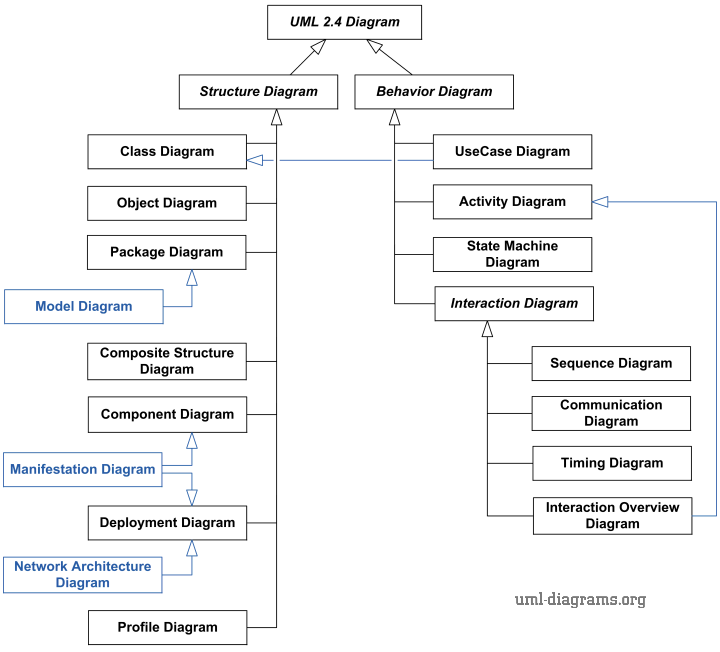 Structure diagrams are not utilizing time related concepts, do not show the details of dynamic behavior. However, they may show relationships to the behaviors of the classifiers exhibited in the structure diagrams.

Class diagram is a static structure diagram which describes structure of a system at the level of classifiers (classes, interfaces, etc.). It shows some classifiers of the system, subsystem or component, different relationships between classifiers, their attributes and operations, constraints.

Some major elements of object diagram are named and anonymous instance specifications for objects, slots with value specifications, and links (instances of association).

Package diagram shows packages and relationships between the packages.

Model diagram is UML auxiliary structure diagram which shows some abstraction or specific view of a system, to describe architectural, logical or behavioral aspects of the system. It could show, for example, architecture of a multi-layered (aka multi-tiered) application - multi-layered application model.

Composite structure diagram could be used to show:

Internal Structure diagrams show internal structure of a classifier - a decomposition of the classifier into its properties, parts and relationships.

Collaboration use diagram shows objects in a system cooperating with each other to produce some behavior of the system.

Component diagram shows components and dependencies between them. This type of diagrams is used for Component-Based Development (CBD), to describe systems with Service-Oriented Architecture (SOA).

Deployment diagram shows architecture of the system as deployment (distribution) of software artifacts to deployment targets.

Instance level deployment diagram shows deployment of instances of artifacts to specific instances of deployment targets. It could be used for example to show differences in deployments to development, staging or production environments with the names/ids of specific build or deployment servers or devices.

Profile diagram is auxiliary UML diagram which allows defining custom stereotypes, tagged values, and constraints. The Profile mechanism has been defined in UML for providing a lightweight extension mechanism to the UML standard. Profiles allow to adapt the UML metamodel for different

Behavior diagrams show the dynamic behavior of the objects in a system, which can be described as a series of changes to the system over time.

Use case diagrams are behavior diagrams used to describe a set of actions (use cases) that some system or systems (subject) should or can perform in collaboration with one or more external users of the system (actors) to provide some observable and valuable results to the actors or other stakeholders of the system(s).

Activity diagram shows sequence and conditions for coordinating lower-level behaviors, rather than which classifiers own those behaviors. These are commonly called control flow and object flow models.

Sequence diagram is the most common kind of interaction diagrams, which focuses on the message interchange between lifelines (objects).

Communication diagram (previously known as Collaboration Diagram) is a kind of interaction diagram, which focuses on the interaction between lifelines where the architecture of the internal structure and how this corresponds with the message passing is central. The sequencing of messages is given through a sequence numbering scheme.

Timing diagrams are used to show interactions when a primary purpose of the diagram is to reason about time. Timing diagrams focus on conditions changing within and among Lifelines along a linear time axis.